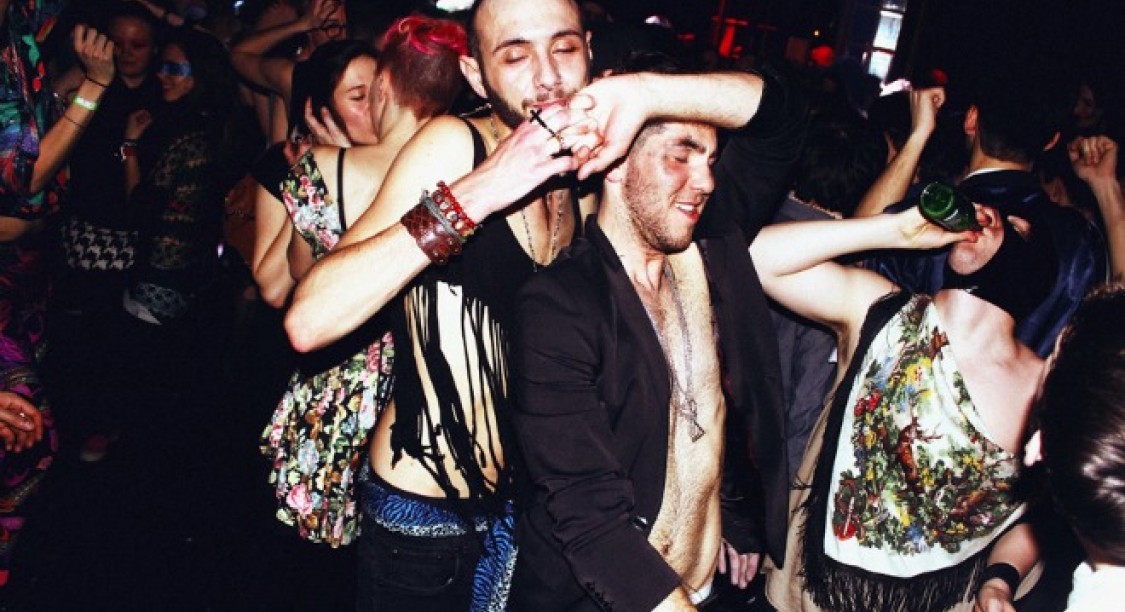 Expo Nightclubbing : 30 years of night parties from le Palace to the Wet For Me

By Anne-Sophie Valentin
From February 9 to 21, the Alisa Gallery presents “Nightclubbing”. A collective photo exhibition that shows us thirty years of unbridled parties in London and Paris, from the Bains Douches to the Wet For Me. On this occasion, we asked four photographers to tell us about their evenings.

What happens at night in the clubs? Seven photographers have explored this shady environment from the mythical Palace and Bains Douches parties in the 80’s to the queer parties of the 2000s, the Flash cocotte, Wet For Me, etc. Their photos, gathered for the Nightclubbing exhibition, have in common to show “bodies in motion, young people eager to have fun, aware of their insolent beauty”, reports the Alisa Gallery in the press release of the exhibition. Above all, they are a fascinating testimony of the looks, codes, subcultures and atmospheres that cross our society. To find out more, we asked four photographers to tell us about the evenings they shot.

The 80’s, the golden age of partying
Jean-Luc Buro frequented and immortalized the Parisian nights of the 80s. He describes this period as a kind of golden age of partying. At a time when “AIDS had not yet taken its toll” and when, because of the financial boom, “money was flowing”, he recalls, “You could go three or four nights in a row at night”. There were “crazy” parties in clubs like Le Palace, Les Bains Douches, where punks and bourgeois, straight and gay, were mixed together. There were also lots of fancy dress parties where people dressed up.

As in London, where “the counter-culture is much more important”, you could easily meet and access the artists: Etienne Daho, Téléphone, Les Rita Mitsouko… The rock bands joined the party people after their concert. And “Gerard Garouste who had made the decor of the Palace was there every night”, says the photographer. According to him, parties are just as unbridled today, with the difference that they serve mainly to “forget the catastrophic political and ecological perspectives”.

Lesbians go wild at Wet For Me and Club Jolène parties

Marie Rouge is the official photographer of the Wet For Me lesbian parties since 2012. It’s a good thing, since her native Normandy, the young woman dreamed of participating. What’s so attractive about them? In addition to “bringing together sharp artists, such as Little Simz, Peaches, J-D Samson“, the organization, led by the association Barbi(e)turix, ensures that the place is “safe”. In other words, that “nobody feels judged” and “that there are no guys who come to pick up girls”. As a result, “they let themselves go more than anywhere else, dancing topless in front of everyone until they go into a trance”. An attitude that Marie likes to grasp because it contrasts with the “stilted appearance” that girls can present on a daily basis.
This “safe” side also comes back in the mouth of Holly Falconer, who photographs the London lesbian nights. She fell in love with Club Jolene because of its “flashy blue walls, chequered floor, eighties TVs scattered here and there and traditional balloon releases”. There, people feel confident enough to “be themselves”, and dress as they wish: “Some women may wear an androgynous outfit, or simply sportswear with razor-sharp hair. There are also those who adopt the vintage Hollywood look, or Frida Khalo’s.”
Marie Rouge also noticed this diversity in Paris. That’s why she does a lot of portraits, with a “political approach”: “I want to show that her evenings bring together not one but several lesbian profiles: androgynous or hyper-feminine, suburban or uptown, avant-garde or classic style.
The assumed bad taste of the Flash cocotte

Hannibal Volkoff brought his lens to the Flash cocotte evenings, at Rouge Pigalle or Espace Pierre-Cardin, and focused particularly on young people, because they surprise him more than “adults”: “At the age when they should be entering the policed world of studies or work, they decide to marginalize themselves through the most unlikely or even uncomfortable looks: Gothico-glam, seapunks, neo-kitch, queer-street, neo-dandyism. ..” According to him, “bad taste is claimed”, like a thumb of the nose “to the class norms”, “a refusal of the society we offer them”.
When he attended these parties a few years ago, there was an unbridled and Dionysian state of mind: “Everyone was on drugs, we were fucking in the middle of the dance floor. After a while, the security guards would say, “Let’s drop it”.  I remember an ex who had a coke rail on each nail and invited everyone to help themselves. There were also naked trannies, people urinating in the middle of the room… “The photographer talks about it in the past tense, because, according to him, even if the Flash cocotte still exists, “we no longer find this state of mind”.
He believes that the current night is heading towards “a normalization, for purely personal pleasure, where a few years ago there was a desire for collective creation”. The reason for this breathlessness is, according to him, “socio-economic”: “I think we have witnessed what we can call decadence, that moment of exuberance that precedes a violent crisis. I am thinking, for example, of the eccentricities of the court before the French Revolution, or the Roaring Twenties before the Great Depression, as if we were saying to ourselves: “it’s now or never, let’s be as crazy as we can”.
The opening of the exhibition will take place on Tuesday, February 9 from 6:30 pm, at the Point Ephémère. Pauline Bessièresy will give a sound performance, then Dani Igor will take over with a DJ Set.
Photographers: Jean-Luc Buro, Holly Falconer, Victoria Lentaigne, Chill Okubo, Marie Rouge, Thomas Smith, Hannibal Volkoff.