First monographic exhibition through the lens of Jeanluc Buro, based on a selection of photographs taken in the 1980s, focusing on places of Parisian nightlife, the movements of the French and international alternative scene and its emblematic artists. 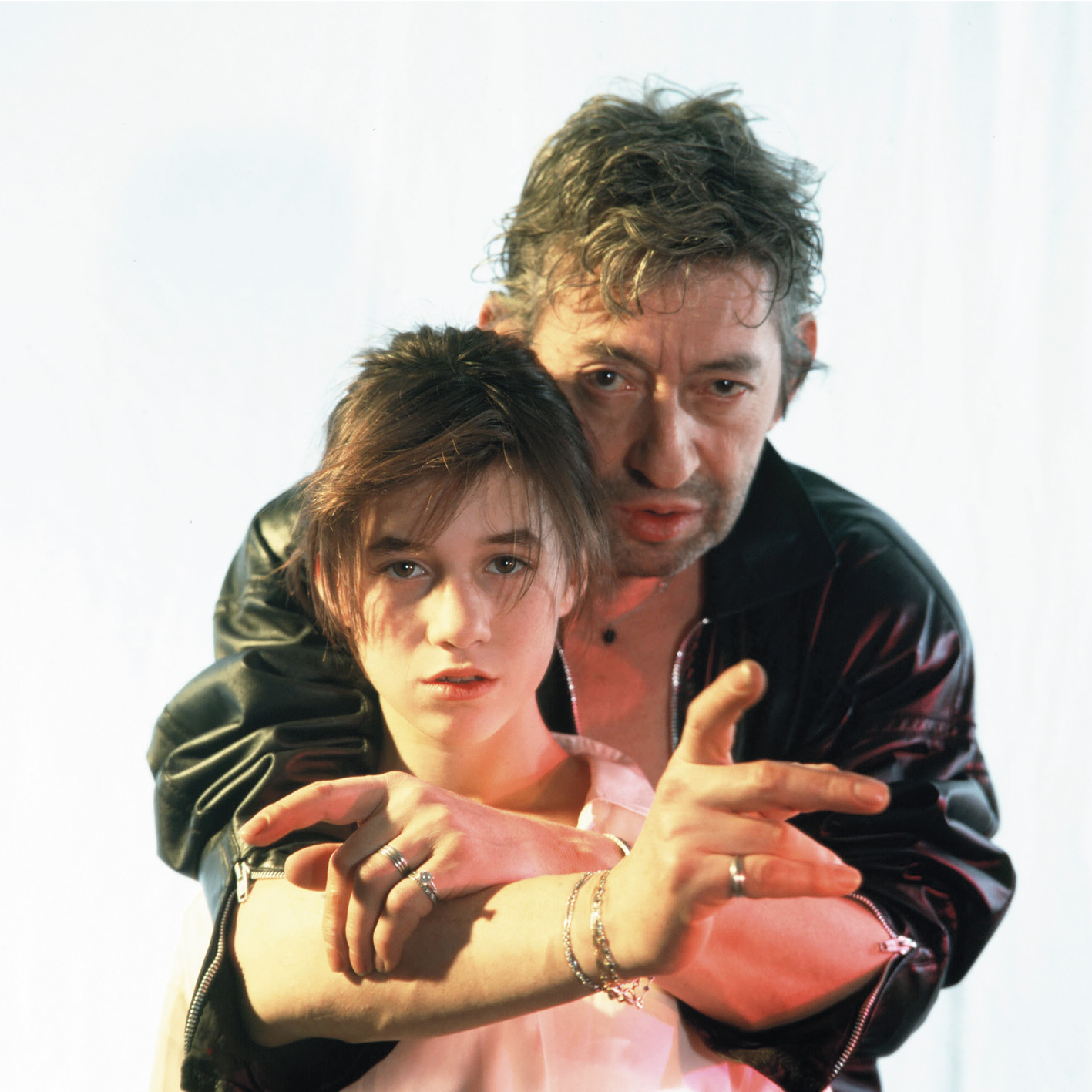 His rendering of Black and White silver is inspired by cinema and the masters of humanist photography.

Jeanluc Buro follows the evening courses of the IDHEC (Institut des Hautes Études Cinématographiques) given by the famous chief operator Henri Alekan (from La Belle et la Bête by Jean Cocteau to Les Ailes du Désir by Wim Wenders) who introduces him to the science of light. Jean Dieuzaide (founding member of the Rencontres de la Photographie d’Arles) taught him the art of black and white printing.

His objective leads us into the proximity of the backstages, after the hysterical Cramps concert in Bobino, the Cure concert at L’Olympia or shares intimate moments with Bauhaus and Taxi Girl at Rose Bonbon. 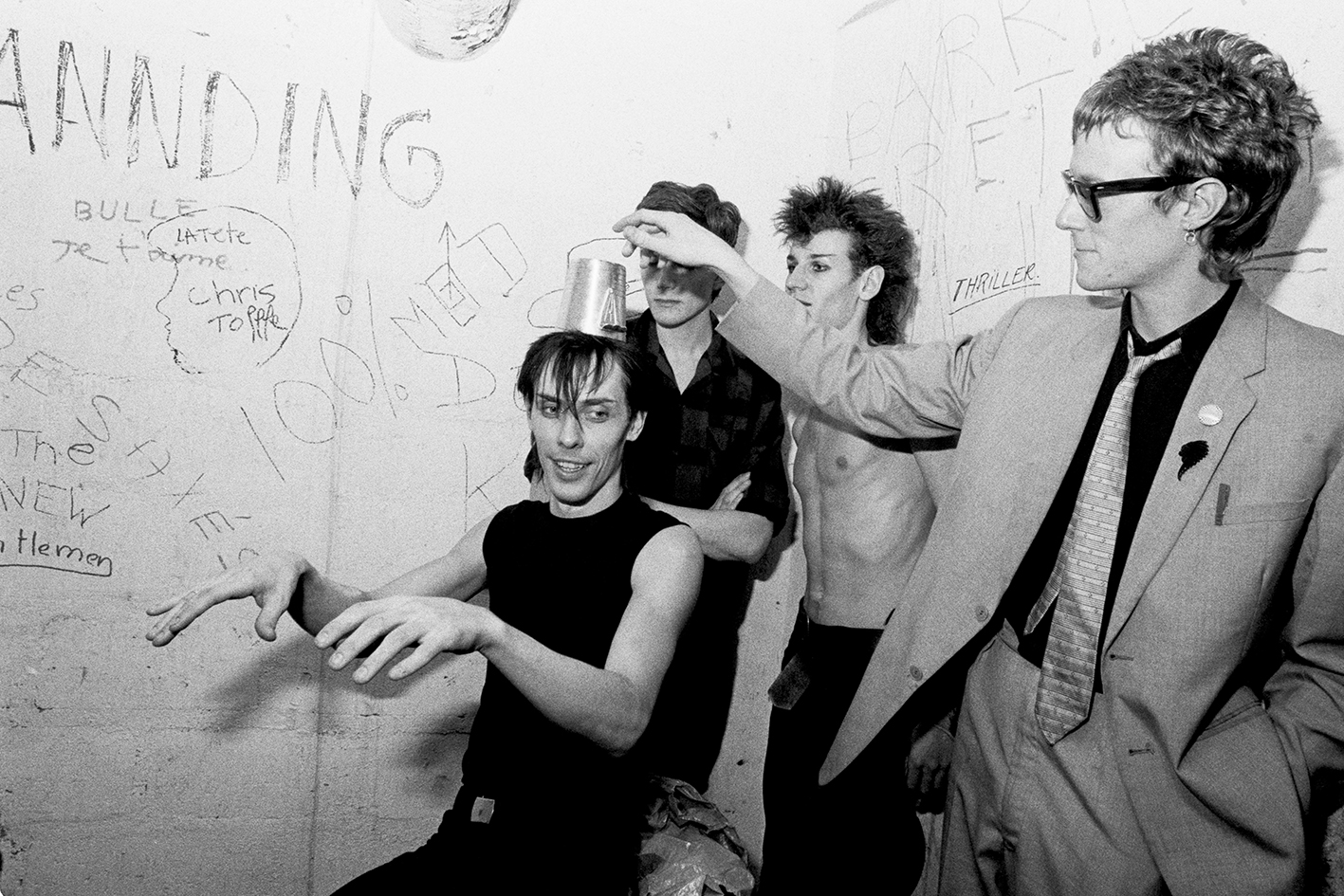 This exhibition is also part of a tribute to the duo Rita Mitsouko, founded in 1979, which this year would celebrate its 40th anniversary. Jeanluc Buro met them at the beginning of their careers, resulting in an important series of portraits, on stage, off stage, entangled in a concert at the Boule Noire in Pigalle or posed as a remake inspired by Brassai and Doisneau. A sensitive portrait of the duo, taken during their first concert at the Pali Kao factory, appears in the booklet of the retrospective that will be released next October.

This inspiration for nightlife and the movements of counter-culture is also accompanied by a spontaneous curiosity that leads him to explore innovative places or attend the most surprising events.

Jeanluc Buro’s appetite and eclecticism have led him to explore various universes, of which the exhibition is intended to be a reflection. 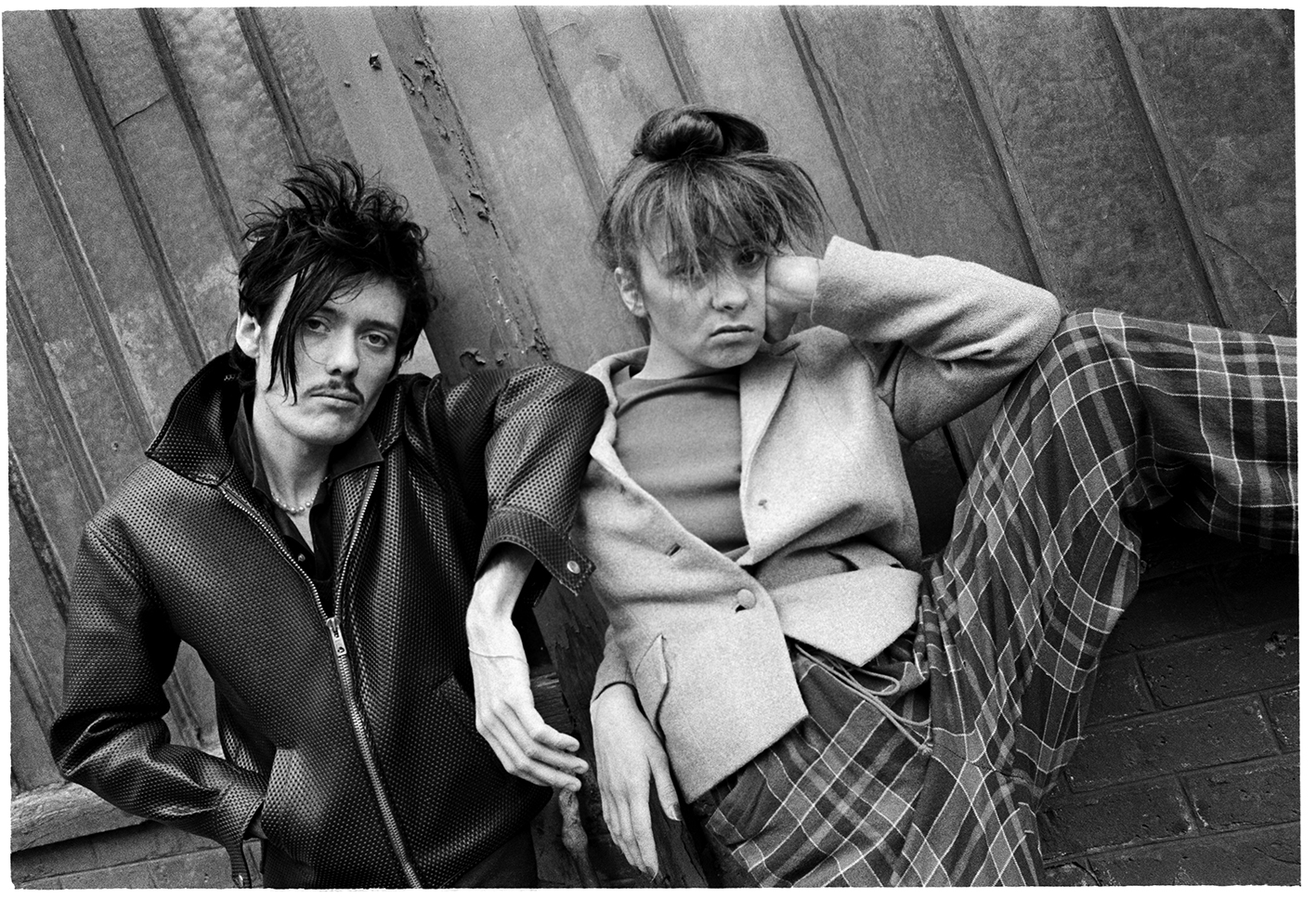 Meeting with The Cure for their second appearance in Paris on November 19, 1981, Robert Smith’s band filled L’Olympia and confirmed the success of their tour for the albums Faith and Seventeen Seconds, with Lol Tolhurst and Simon Gallup, the band’s historical bass player.

The candy pink lodges in its glory days with Bauhaus and its charismatic leader Peter Murphy, a disturbing embodiment of the Post-Punk/Gothic movement. December 3, 1981.

The Meteors, considered as the pioneer of Psychobilly, led by Paul Fenech, here accompanied by the guitarist of Theater Of Hate. Les Bains-Douches, December 9, 1981.

Stephen Morris, drummer of New Order, lodges of the Palace on April 17, 1982 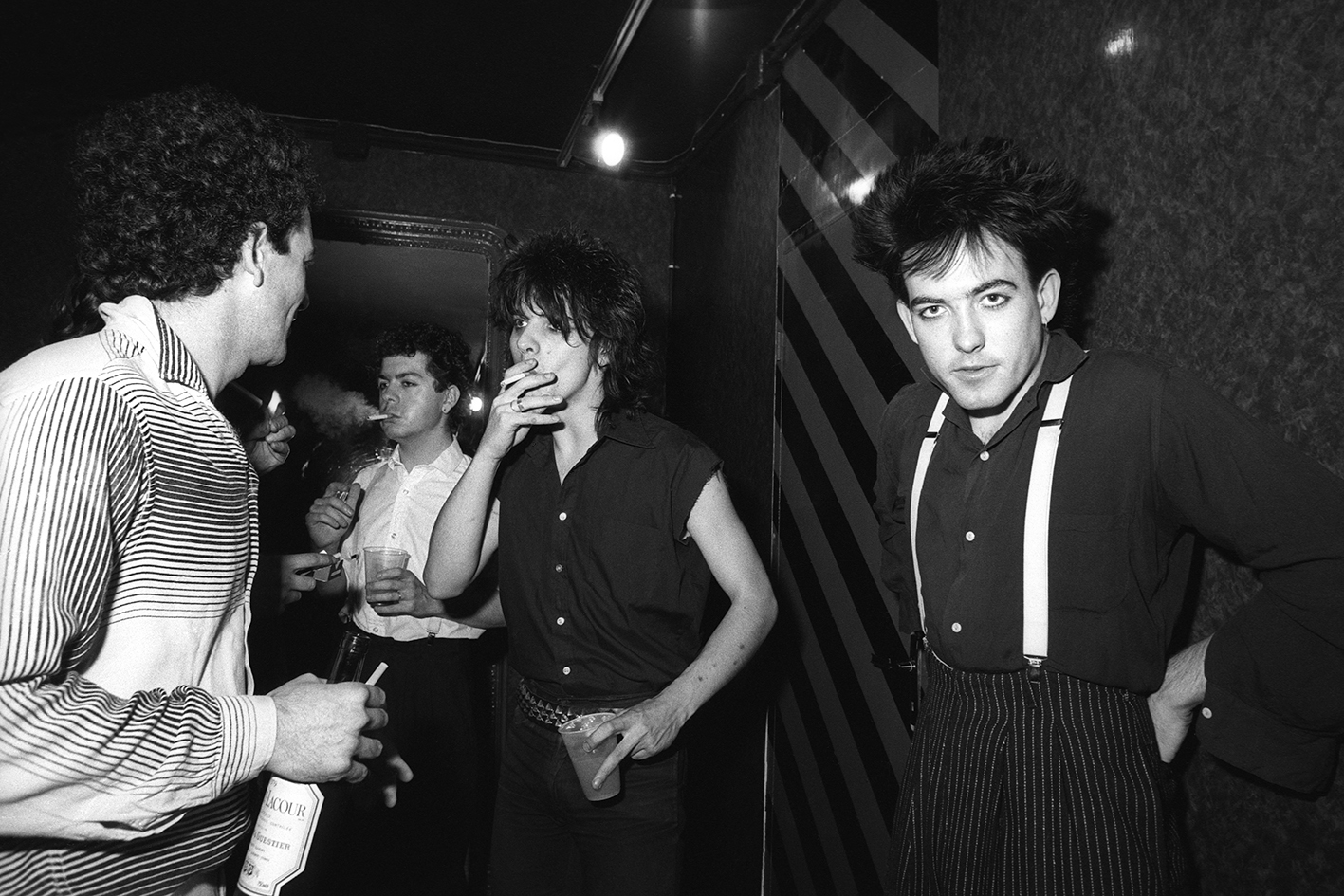 Marquis de Sade, at the Palace, on March 4, 1981, which proved to be the leading group in what has been called the Rennaise scene. The city is even considered as the French capital of rock and New Wave during the 80s. A portrait of Philippe Pascal driven by an expressionist interpretation, during his last concert in the capital, before the group’s disintegration three months later.

Edwige Belmore, the Punk icon who was once a physiognomist at the Palace, then a singer in duet with Mathématique Moderne, is pursuing a career as a singer and saxophonist with the ephemeral group Jungle Geisha created in New York. Concert at Les Bains-Douches, November 9, 1982.

Etienne Daho from the Rennaise wave, in his attic room, rue des Dames in Paris. A Rock’n Folk commission for the release of the album Mythomane in November 1981, with the musicians of Marquis de Sade and Jacno in production.

The trash cabaret of Virgin Prunes, an Irish group that will deeply mark the Gothic rock scene with its scenic performances, an alliance of tribal and subversive beauty. Rex Club, June 1982.

Klaus Nomi, appeared on the stage of the Palace on November 19, 1981. Spectacular vision with a supernatural voice from bass baritone to countertenor. He was one of the first artists to die of AIDS in 1983.

The legendary Alan Vega, precursor of electro punk rock, founder of the group Suicide, during a memorable concert at the Olympia on May 29, 1982.

Indochine, founded a few months ago, became the revelation of the new Parisian New Wave scene, Jeanluc was one of the lucky ones present at their very first concert on the Rose Bonbon stage in autumn 1981.

The first musical experiences of the Rita Mitsouko and their universe Arty degenerated on the underground stages of the capital.

The events at the Palace were a vibrant gallery of portraits of the mix of genres: anonymous and famous, the bourgeois gawking and the marginalized explored the intoxication of the festival without limit or hierarchy.

The Evening on the theme of tattooing, where we identify the comedian Thierry Le Luron with Fan, Skinhead from the band of Les Halles, model of a night for the tattoo artist Éric.

The fifties band of the Palace, led by the young actress Pauline Lafont, surrounded by her rocker friends.

The Starshooter concert with Kent Hutchinson talking generously with his audience for the band’s last tour, called Tora! Tora! Tora!, at the Palace in 1982.

This beginning of the decade also marks the arrival of new concepts with the launch of ephemeral places: the afters of Captain Video, moments captured at the end of Duran Duran’s concert for their first time in Paris, Rock In Loft, the 120 nights, Les Nuits d’Actuel or Le Rex etc…. 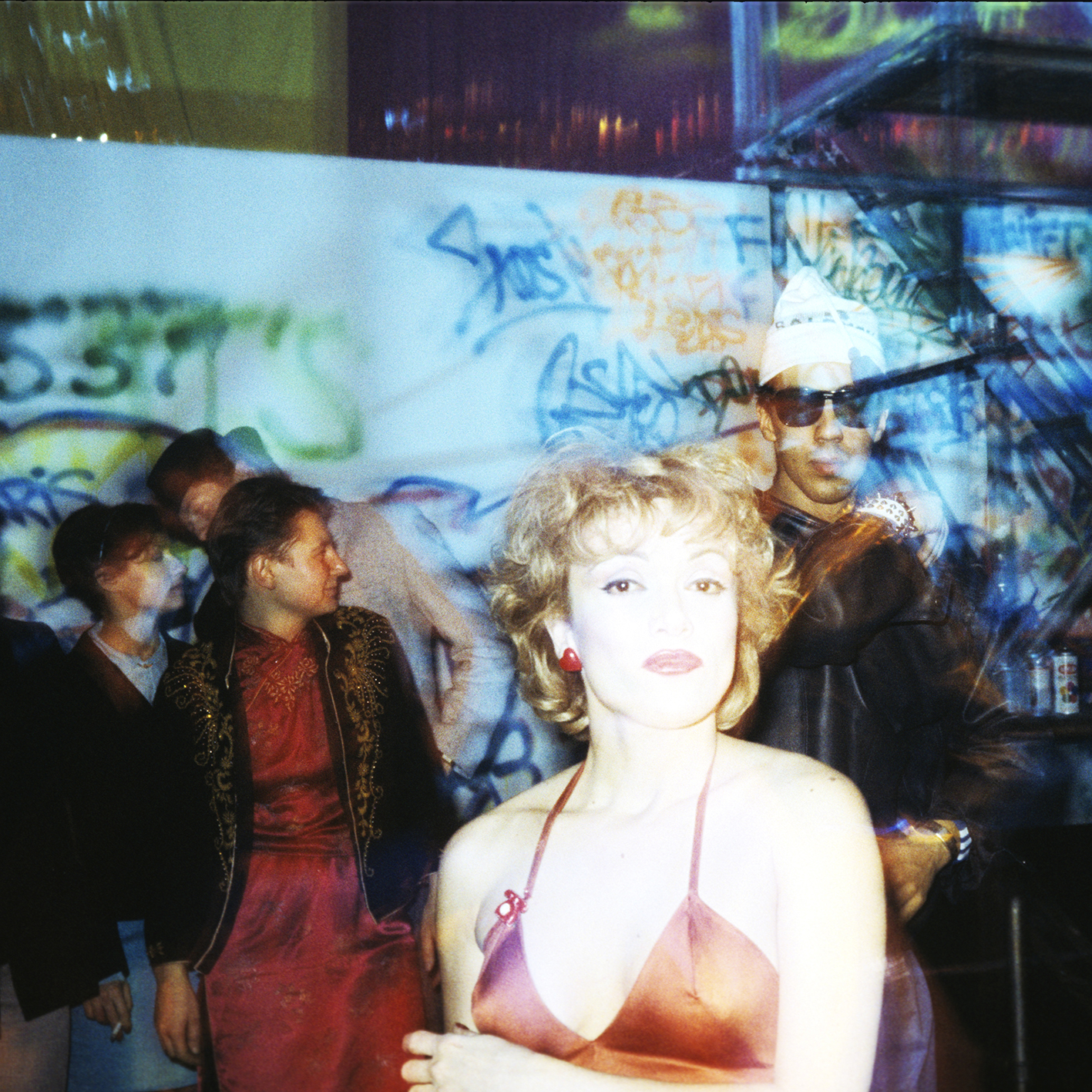 Street Artist Futura 2000, New Yorker and Graffiti pioneer, who accompanies the tour of the English group The Clash in Paris. Photo taken during a happening at the Palace with the underground muse Marie France.

Jérôme Mesnager, a French painter, participated in the urban art movement in France and in Figuration Libre in the early 1980s. He is the inventor of the man in white, icon of light and peace, first created in 1983 during an event of the Zig-Zag collective, a group of young artists who invest and animate abandoned places, factories, cellars and catacombs.

Images that have the value of archives, during events or concerts that took place at the Pali Kao Factory. This former abandoned paper mill located in Belleville was dedicated to the alternative margin and independent crops. This place enjoyed a reputation across the Atlantic with its first experience in December 1981 of “Slow Scan Transmission”, the ancestor of Streaming, with performances instantly transmitted to the Boston MIT. Photographic documents on the Pali Kao Factory are extremely rare. This high place of exhibition and underground experimentation has seen the emergence of a much appreciated alternative scene. 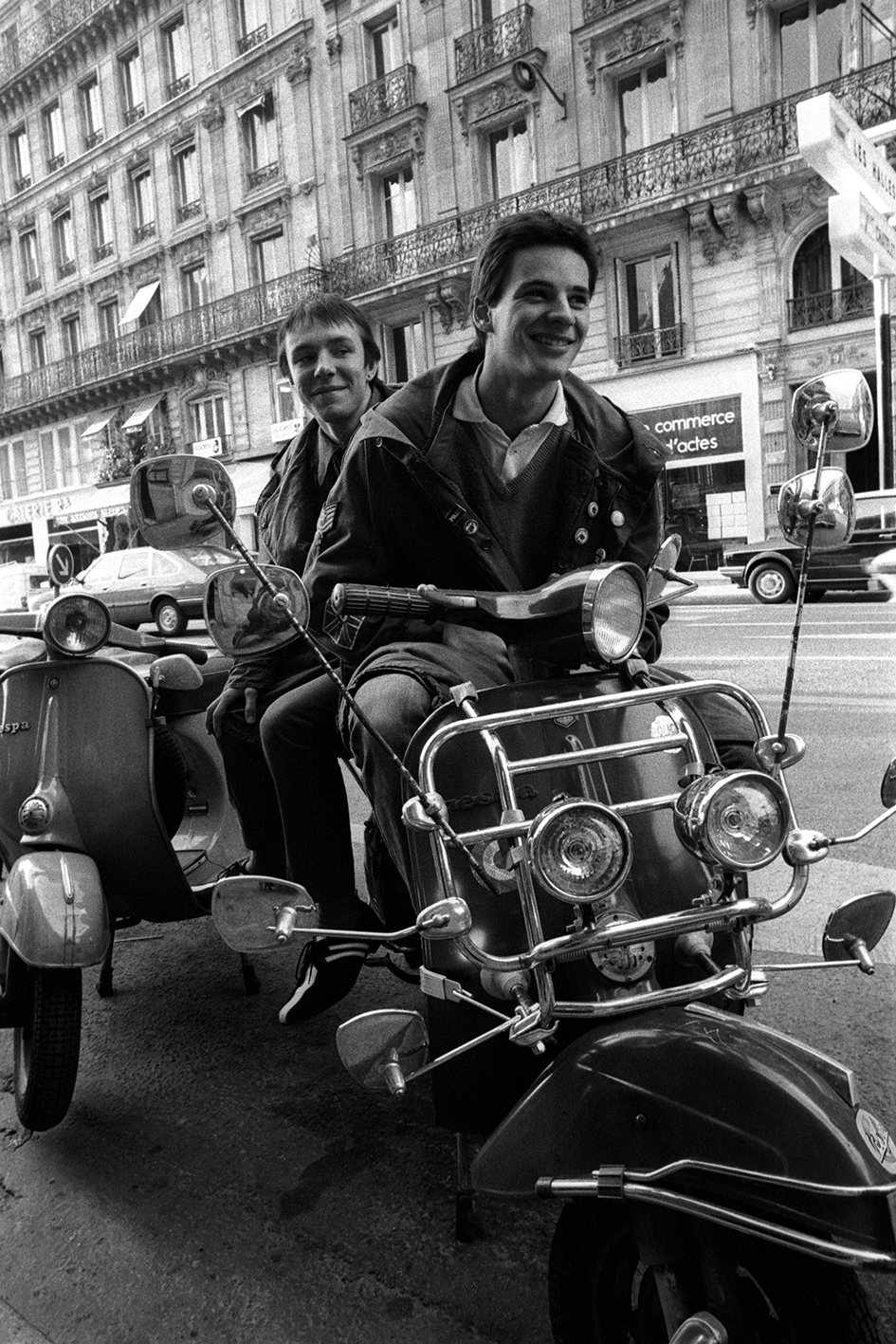 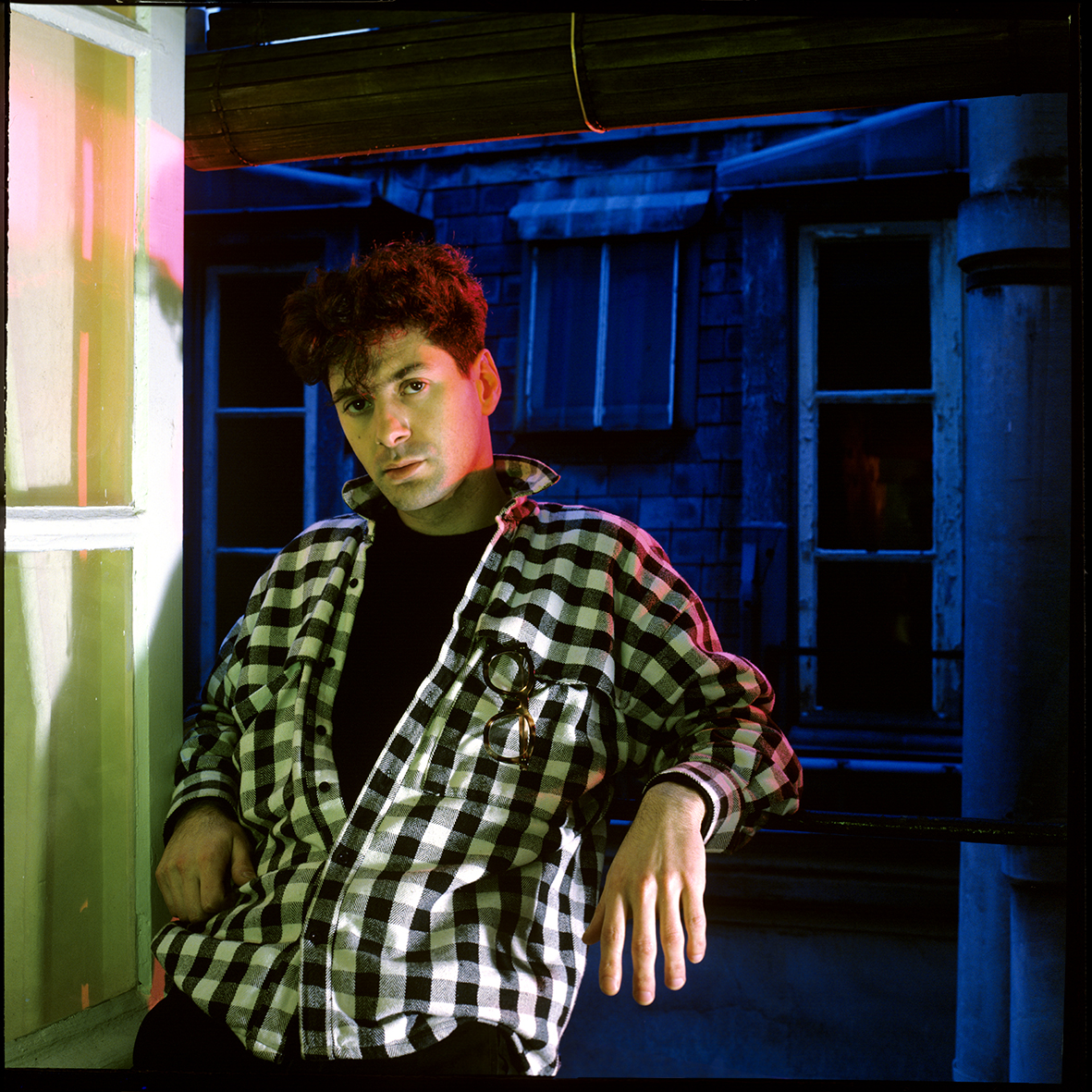